Just sitting in a suitcase full of toy cars...

Our snowbanks are getting pretty tall. They are up

Playing with his marble run.

Just sitting in a suitcase full of toy cars... https://www.instagram.com/p/CLkx_FSHj9O/?igshid=1kzfxrswcbn6b

Our snowbanks are getting pretty tall. They are up to my waist! https://www.instagram.com/p/CLXEmsgnvr7/?igshid=1ofzcm2gbxqvg

Playing with his marble run. https://www.instagram.com/p/CLUqu-XHDUA/?igshid=h9l9rk4b13fm

Before having a baby I thought that the labor would be the hard part. But honestly, my labor was great. I had barely any pain, thanks to the epidural. I would definitely go through labor again if it was as easy as mine was.

What I was NOT prepared for was the recovery. At the risk of TMI, it felt like I had poop sticking out of my butt all the time. And walking hurt a lot. I had to walk so slow everywhere because of the pain. Even just standing during those first few days was painful.

When using the bathroom I felt like I was trying to poop but I honestly couldn’t tell, so I would have to look in the toilet water reflection to see if anything was hanging out of my butt. And everything was a bloody mess down there so I couldn’t really see what was going on.

Using the peri bottle to clean myself after using the toilet was a pain. I would have to fill up the bottle with water that wasn’t too cold but definitely not too hot. It took me many days to figure out how to regulate the water to the right temperature. Thinking to pour a little on my wrist to check the temperature was a game changer.

But I would have to run the water a while to get it hot enough and I already had to pee pretty badly. Running my hands under water while needing to pee was less than ideal. I would be standing there with my legs crossed telling the water to hurry up so I wouldn’t pee my pants. But there were a couple times where I just couldn’t hold it. Thank goodness for wearing heavy pads during this time…

Sometimes peeing would sting, but usually it wasn’t too bad. And I would feel pressure in multiple areas. When patting myself dry I would feel this large bulge that I have no idea what it was. I think this is the part that was making it so painful to walk. I hated going to the bathroom.

The pain made it hard for me to move around and I mostly just wanted to sit or sleep all day when I was home. But there were things that needed to get done around the house too. Thankfully my boyfriend took care of me for that first week at home. 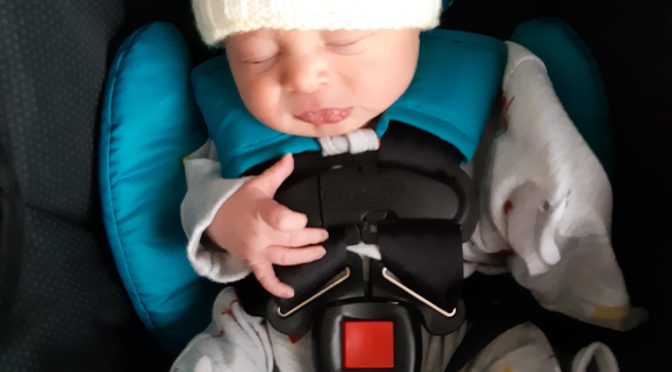 I spent two nights in the hospital. We had nurses coming into the room at least once an hour to check baby and mom. They were checking my blood pressure, both of our temperatures, among other things I don’t even remember.

I was given my baby either by my boyfriend or the nurses to feed anytime he was hungry. I had to keep drinking fluids to stay hydrated and so I could fill my bladder and pee.

I struggled with getting Elliott to latch to my breast and had multiple nurses throughout my stay tell me and show me how to do it. Each one had different advice and it was hard to know what I should be doing. My nipples were getting so sore and cracked. I was given nipple cream which I was thankful for. I was given a nipple shield at one point because I was in so much pain. I was told to listen for swallows but I really couldn’t hear them so I didn’t even know if my baby was getting any food from me. Eventually we started to supplement with formula to make sure he was eating.

That first night my boyfriend slept for most of the time which was frustrating for me. It’s hard to wake him up sometimes. I was so sore from giving birth that I couldn’t even get myself out of bed without someone pulling me out.

I was still attached to the IV so in order to use the bathroom I had to unplug and bring the stand with me. I was not allowed to wipe after using the bathroom so they gave me a bottle which is used to spray yourself and then you pat yourself dry. I also was given mesh underwear which you put two pads onto. I was changing the pads every time I used the bathroom (about every 3 hours). A lot of women have issues having a bowel movement after birth but that wasn’t an issue for me.

Eventually I was detached from the IV which I was very happy about. I was able to relax a little more after that. I spent most of my time in bed though which was uncomfortable. After a while I also started to feel pain “down there” which I was given medicine for.

As the mother who just gave birth, the hospital stay wasn’t too bad. I would ask the nurse or my boyfriend to get me a drink whenever I was thirsty. I was served breakfast, lunch, and dinner; although it wasn’t the best tasting food. I was having trouble eating the food though because I usually had a baby in my arms and I was not yet good at multitasking with a baby. So I would have to get someone to come take the baby from me so I could eat.

As for the dad’s stay, it was less than comfortable. My boyfriend had to sleep on a bench and wasn’t given any food to eat. We had packed some pillows, a sleeping bag, and snacks so at least he had that. But he was very ready to leave when it was time to go.

On my second day, my pain was pretty bad. I kept asking the nurse for pain medication. She was a little concerned with the amount of pain I was in for only having a first degree tear. But she checked my lady bits and said everything looked fine. Before leaving the hospital I was given a prescription for some pain medicine which I picked up on my way home.

In the morning on my last day at the hospital there was a Breastfeeding Cafe down the hall. You went down with your baby, and a woman was there to help teach you how to feed your baby. She was a little intense, but I did learn how to better position my baby to latch. She was also going on the whole time about making sure you are drinking lots of water. She’s like “Water, water, water. Soup, soup, soup. You need to have water every hour. If you don’t like water, have soup. Add flavors to your water. Just make sure you are hydrated.” She also gave us information on different massages you can do to help your milk flow and supplements you can take to increase your production.

After lunch on Friday we were finally allowed to leave the hospital. One of the nurses went over a bunch of information to make sure we were confident in going home with our new baby. Honestly I was so tired that I was only half listening to her.

We got Elliott dressed in his going home outfit and tried to figure out how to get him properly seated in the car seat. We couldn’t figure out how to loosen the straps on the car seat. Probably took us 5-10 minutes to find the latch. And then I put the leg straps around his legs wrong. Thankfully the hospital staff checks to make sure everything looks good before you leave.

The day we left was a very cold -20C something. While Elliott wasn’t really a fan of the cold air, he didn’t complain too much going from the hospital to the car.