Over the last year I enjoyed finding activities to do with my son. For the first few months we pretty much didn’t go anywhere, mainly because I was scared and still trying to figure everything out. I took him out for our first walk in the stroller in March when he was almost 2 months old. He slept for most of it.

In May my parents came out from Nova Scotia to meet Elliott when he was around 4 months old. We took him out to Jurassic Forest, the Royal Alberta Museum, and the Devon Botanical Gardens.

Also in May I took him out to the Ukrainian Festival where we listened to some music and watched the dancers. I also started doing “hikes” with the Hike It Baby group, which is basically scheduled walks with other moms and babies.

In June when he was around 6 months old we started going out to the library for their programs. They have a few different programs geared to young kids where you sing, read stories, and play with toys. I really enjoyed that and talking to other moms. We also went to a parade in June and the Calgary Zoo.

In July I went to my first Facebook mom’s group meetup, this time at Edmonton Valley Zoo. This is where I met my first mom friends who I’ve hung out a couple other times since then. In July I also took Elliott out to a Highland Games event and to his first movie, The Lion King.

In August at 8 months old, Elliott and I got lost in the Edmonton Corn Maze, went on more walks with friends, and attended another parade.

In September we went to visit his other grandparents in British Columbia for a week. It was an 11 hour drive each way. He did great on the way there, only crying for the last hour. But the drive home was a different story. He cried almost the whole way home.

In September we continued going for “Hikes” and to the library. We also went swimming for the first time with our friends from the Zoo Meetup.

In October at almost 9 months old we went to our first birthday party and to our second movie, The Adams Family.

In November I took him to a craft fair but it was so crowded I could barely get the stroller through the aisles so it was not very enjoyable. We went to see Santa at Southgate Mall and went to a Santa Claus parade at the Mill Woods Town Centre.

In December we didn’t do a whole lot. The weather got colder and snowier so I didn’t really want to leave the house. We had a visit with some friends near Christmas and we went out to the library once. Hopefully we will have time for more adventures next year, but it will be harder since I will be back at work. 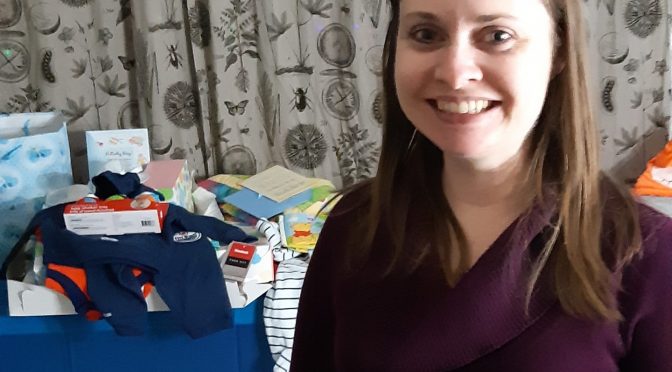