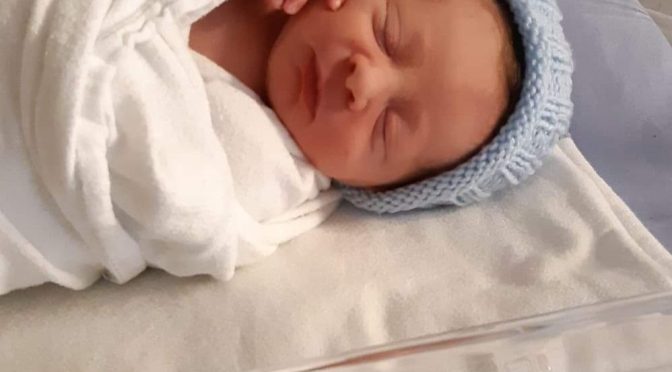 On January 16th I went to another ultrasound to check on baby. He was still measuring small but the amount of fluid around him had also decreased.

After that appointment we stopped for lunch then went over to the hospital for a NST (Non-Stress Test). This is where they place some monitors on your stomach to see baby’s heart beat and I think my contractions? I also had a button that I was supposed to push everytime I felt the baby move. I was checked to see if I was dilated. I was only at 1 cm. To have a baby you need to be at 10 cm.

They were happy with the results of the NST but the doctor was concerned about the amount of fluid surrounding the baby which was measured at the ultrasound. She said it would probably be best if they induced me that day.

We knew being induced was a possibility so we already had our bags packed and car seat in the car.

Around 3pm we moved to a birthing room and I was given a gown to put on. They wanted to make sure the baby wouldn’t get stressed out during labor so they started some practice contractions and see how he handled it.

My left hand was hooked up to an IV which apparently made me bleed a lot. I didn’t see the blood but the nurse had to do a lot of cleaning of my arm and the floor haha. Through the IV they also started a Pitocin drip which makes your body start contracting to make you dialate more.

On my right side I had wires running from their computer to my stomach. They had the monitors on my stomach again showing the baby’s heartbeat and my contractions. Everything looked good and the baby was handling the contractions well.

From here on out I was pretty much confined to my bed. I would get up every hour or so to use the bathroom but they would have to unhook me from the computer and unplug my IV from the wall. I needed my boyfriend to help me get out of bed and walk to the bathroom as I was a little unsteady and I was afraid of pulling the IV out of my arm when trying to get up. I also would start shivering everytime I got up.

Every so often the nurses would increase the amount of pitocin to increase the contractions. Nurses were constantly coming in and out of the room to check the progress and see if I needed anything. They would check my blood pressure and my temperature. Periodically I would show that I had a fever but it kept going away.

There were also a lot of students shadowing the nurses. At one point I was given a mango popsicle which was delicious. Some of the students were more annoying than others so I hope I didn’t give them the stink eye haha.

There was one nurse in particular that I liked the most. She was the most helpful and she was funny.

When I was about 4 cm dialated I asked if it was too soon to get an epidural. I had hoped I would last longer than that but I figured if I planned to get one eventually, why suffer now if I didn’t need to. It was probably close to 8 pm at this point.

They had the anesthesiologist come in to explain how the epidural works and get my verbal consent. Beforehand I was pretty scared of getting the epidural but it didn’t hurt at all.

So now at this point I have tubes coming from my left hand, wires coming from the right side to my belly, a tube coming out of my back, and eventually a catheter coming from my bladder (which I was looking forward to because I was tired of getting up to pee and having to drag my IV with me). I kind of felt like a robot or something.

My contractions went from a pain level of a 5 or 6 back to a zero pretty much, thanks to epidural. My legs were numb which was a weird feeling. I laid my arm down on my leg and wasn’t sure what I was feeling because I couldn’t feel it on my leg.

My favorite nurse’s shift was ending at 11:30 and at this point it was around 9:30 or 10 pm. To try and speed things up the doctor decided to break my water. There really wasn’t that much liquid that came out.

Shortly after my water was broken I started feeling my contractions again and they were getting painful. I tried to wait for the nurse to come back to the room so I could ask her if it was normal but she was taking too long so I pressed the call button.

I told her I could feel the contractions and also that it felt like I was pooping (this is a sign that you’ll need to start pushing soon). I even asked her to check just to make sure I hadn’t pooped haha. She asked me if I was trying to make sure I had this baby on her shift and I told her yes.

She checked to see how dialated I was, and within half an hour I had gone from a 4 to a 9.5cm. It was almost time to start pushing.

Every time they checked me I would start bleeding. There was a lot more blood throughout the labor process than I expected. I thought it all came once baby came out.

Pushing took longer than we thought it would. I had to get someone on each side of me to hold up my legs as I could not feel them. The lady who was helping me push kept telling me I was doing a good job but it really felt like nothing was happening.

My favorite nurse stayed past the end of her shift in hopes to see baby but ultimately had to leave before he was born.

The doctor wasn’t brought into the room until baby was just about ready to come out. They couched me the rest of the way. I remember at one point two people yelling “Don’t push, don’t push!” They made sure baby was in the best position to come out and told me to push one more time. Finally at 12:32am Elliott came into the world.

I was given my baby to hold and his dad got to cut the cord. While Elliott was lying on me he had his first poop on my chest.

The next 30 to 60 minutes was spent with them delivering my placenta and stitching me up. I only had a 1 degree tear (out of four) so I was very happy to hear that. But instead of tearing straight, I tore in multiple directions. It felt like it took them forever to stitch me up. Thankfully I couldn’t feel anything due to being numb.

Once they were finally done we were moved to the room we would be staying in for the rest of our stay.